It’s curious how little Dark Star is discussed in the canon of John Carpenter. It’s also puzzling given its rather large contribution to the sci-fi boom of the late 70’s that resulted in Star Wars (1977) and Alien (1979). Both franchises continue to dominate the market almost 40 years later. And Carpenter has never been hotter. He’s successfully parlayed his iconic status into successful second careers in music and comic books.

In recalling the time between the heady and serious 2001: A Space Odyssey (1968) and the more fantastical and forgiving world of Star Wars, it’s hard to think of any other title that perfectly bridged the two. Even in 1970, George Lucas would sear the sci-fi genre by releasing a dark, grim vision of the future with THX 1138, cementing his preferred sensibilities in the more sobering and academic and less in the pulpy adventures of Buck Rogers, something he admiringly mocks in the opening moments of the film. As the promise of the 60’s deteriorated and a public wanting more escapist fare, Lucas regressively stumbled backwards, awash in the nostalgia bug he picked up when escaping the realities of 1973 with American Graffiti. What he landed in, though, was Star Wars, a far sunnier vision of sci-fi that was bronzed with the American Western and Japanese Samurai films that informed Lucas’s creative mind.

So 1977 got space via the grand adventure films of Akira Kurosawa and 1974 got, according to Carpenter, “Waiting For Godot in Space.” Not only is that an apt description of the movie, it also is a dead-on example for the type of mindset that the defeatist and exhausted American movie-going public was in in 1974.

At the time of Dark Star’s creation and eventual theatrical release, Stanley Kubrick was still at the top of his game. Though his most recent film, 1971’s A Clockwork Orange (yet another sterile, grim look at the future), had been met with an alarming amount of controversy and wasn’t exactly embraced by all of the critics (Roger Ebert wasn’t all that hot on it), Kubrick’s reputation was still riding high from 2001: A Space Odyssey, a game changing mind-blower that still rendered him exciting and mysterious. And even though the worst of the Cold War’s nuclear fears were behind them, America still held Kubrick’s Dr. Strangelove in high regard but, only 10 years old, more as a slightly older, yet still contemporary film.

Co-written by Carpenter and fellow UCLA alum Dan O’Bannon, Dark Star utilized the vision and satirical sensibilities of Kubrick’s freshest and exciting works as the foundation for a yarn about the crushing boredom and claustrophobia that is shared among the crew of a star cruiser, charged with destroying unstable planets.

And like Equinox before it and the surprisingly enduring Flesh Gordon, released the same year as Dark Star, the low-budget effects are more than worth the price of admission. Though it lacks the absolutely amazing stop-motion animation of those two films, Dark Star mixes models and animation with ingeniously crafted production design; muffin tins, beach balls, 8-track tapes, ice cube trays, styrofoam packing are all utilized to surprisingly brilliant effect.

But while the innards are dressed by O’Bannon’s gadgets and his clever gags, the visual flow and sound design are all Carpenter’s which makes his presence as equally towering as that of O’Bannon’s. The classical visual compositions and the gently fluid camera crawls all recall certain specific moments that would appear later in Halloween (1978) and the Thing (1982). And Carpenter’s electronic score is, if not one of his best, one of his more underrated; a menacing, droning wave of bad, electronic vibes that seems to elevate the film when its on the soundtrack.

Dark Star is also an excuse for Carpenter to indulge his inner Howard Hawks for the first time as he serves up a story that, however comic, is populated by Men in Extreme Situations. The interaction between the characters is interestingly humorous in the same fashion that the blunt dullness found in the uncomfortable silences of Jim Jarmusch’s Stranger Than Paradise (1984) is what makes that whole endeavor so hilarious.

As a story, there’s not too much to Dark Star. It’s a barely cohesive string of set pieces that build the framework of something that looks like a movie. And like both Equinox and Flesh Gordon, there’s not too much in the filler that sticks these moments together. But Dark Star is like raw, uncut magic. From Carpenter’s direction to the impressive number of special effect pros that sprang from it, Dark Star is like watching a visual resume. Funny, liberating, and fueled on sheer energetic talent, little wonder that the galaxy far, far away that was created from Dark Star’s potent elements was such a phenomenon in 1977. 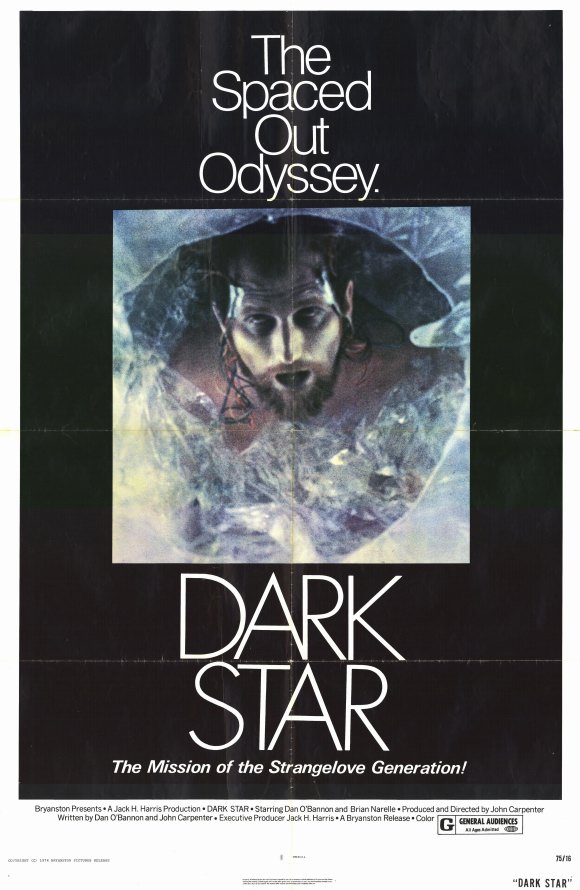